It gives me immense pleasure to pen a few words as prologue to our by-annual news bulletin ‘PRODIGY’ exclusively meant to highlight the effort of students and faculty members who are constantly thriving for betterment of the college.

Empowerment of students for their all round development through education is our vision and mission. Our college curriculum incorporates well being, encourages social responsibility, promotes creativity, fosters learning and even enhances academic achievements. The combination of focusing on our students’ academic success as well as their social and emotional well being creates an environment to achieve amazing things every year.

I am thankful to the editorial team for their help in bringing out this news letter. I wish everyone Happy Christmas and Happy New Year. Let the New Year inspire us to define our new goals, motive us to make new commitments, encourage us to live up to our promises. 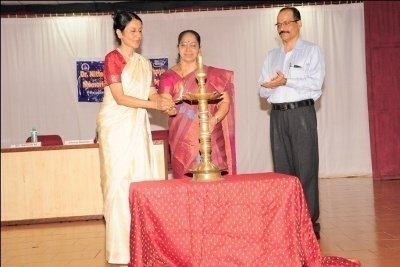 A Three-day bridge course and orientation program was conducted from 19th to 21st June 2017 for the first year students to familiarize them with the campus, faculty members, course details, facilities available, fests and about rules and regulations of the college. Prof. Shalini K. Sharma, Head, Department of Counselling, Student Welfare, Training and Placement, NMAMIT, Nitte, inaugurated the program and delivered a talk on ‘Adolescent Psychology’. Thereafter, various sessions were held on the topics like ‘Small Things that Matter’ by Mr. Joy Elvine Martis, Assistant Professor, Department of Humanities, NMAMIT, ‘Journey towards a better tomorrow’ by Dr. Sharada Prabhu, Professor, Department of Physics, NMAMIT.

The third day also witnessed talks by eminent people like, Dr. Sudhir M., Professor, JKSHIM, Nitte, on the topic ‘Personal Excellence’, Dr. Sudhir Raj, Professor, JKSHIM, on the topic ‘Understanding the Brain for Learning Effectiveness’ and Mrs. Umashankaran, Director, Student Affairs, Department of Humanities, NMAMIT, on the topic ‘Anger Management’. The Orientation Program also featured Quiz contest and games conducted for the first year students by the senior students of the college, and talents show was performed by the freshers at the end of the third day. 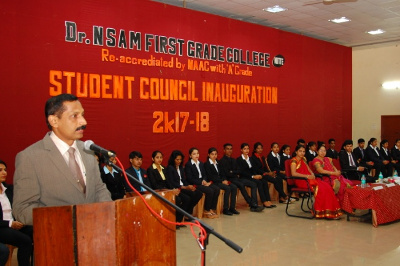 The 29th Students’ Council Inauguration was held on 11th July 2017 by Dr. Manjunath Kotian, Principal, Sri Bhuvanendra College, Karkala. He advised the students that “One cannot do great things on this earth, do only small things with great love to achieve the great”. He quoted a few lines of Barack Obama that “Student Council is like the Amazon river in the polluted world which maintains its sweetness even after entering the sea”. He concluded his speech by telling the students to “Try not to become a man of success, but try to become a man of values”. 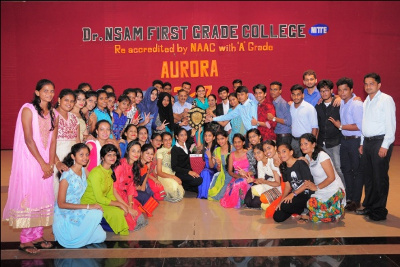 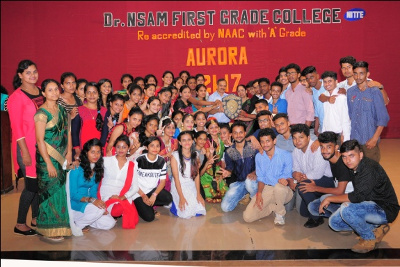 The Students’ Council conducted ‘Aurora-2K17 an inter-class competition’ from 19th July to 3rd August 2017. It included various events like Best Manager, Journalism, Treasure Hunt, Pictography, Cooking without fire, Finance, Human Resource, Marketing, Mock-press, Cyber quest, Quiz and group events like Movie spoof, Group singing , and Group dance. Students took active participation throughout, which had started in the month of July. The finale of all the competitions was organized on 17th August 2017, the Chief Guest, Dr. Ananth A.G., Department of Electronics and Communication, NMAMIT, Retired Scientist, ISRO, distributed the prizes to the winners of various competitions, at the end of the day. ‘Aurora-2K17’ Overall Championship trophy was jointly bagged by III B.Com (A) as well as III B.Com (B). Dr Veena Kumari B.K., Principal, Mrs. Manu Kumari, Student Council Director and Evans Rego, Secretary were also present at the event. 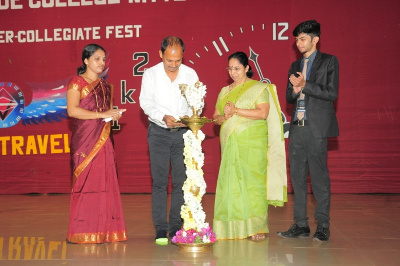 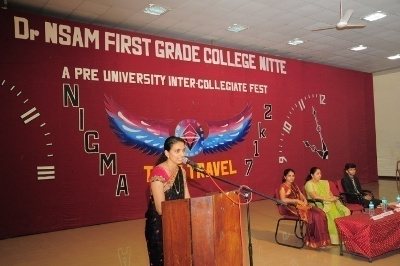 N-IGMA 2K17 Pre-University Level Fest was organized on 4th September 2017, with the theme ‘Time Travel’. Dr. Sudhakar Shetty, President of Padma Gopal Education Trust was the chief guest for the inaugural function. He briefed the students that “Everything in life should have priorities and we must have discipline to lead our life towards success.”

This was followed by valedictory ceremony in which Mrs. Soumya Suvarna, Manager, Syndicate Bank, Nitte was the chief guest. She inspired the students by saying “All are Winners, Everyone loses to win”. She also distributed the prizes to the winners. 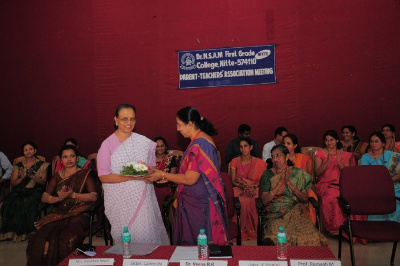 PTA meeting for the year 2K17 was organized on 22nd September 2017. Chief Guest of the program Sister Carmelita, Counselor, Vamanjoor addressing the parents said, “In families where there is high level of conflicts and animosity between the parents, children are at greater risk of developing emotional, social and behavioral problems, as well as difficulties in concentration and educational achievement.” Concluding her speech she said, “Providing children with an environment in which they feel physically and psychologically safe is critically important for children for their wellbeing and must be given high priority.” The meeting was presided over by Mrs. Yogini Bhat, President, Parent-Teachers’ Association. Dr. Veena Kumari B.K., Principal, stressed on the point ‘Role of parents on the overall development of the students’. Joint Secretary Mrs. Shashikala K. Hegde, Mr. Ramesh M., Students Welfare Officer, Teaching and non-teaching staff members were also present on the occasion. 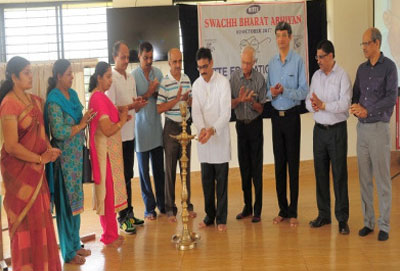 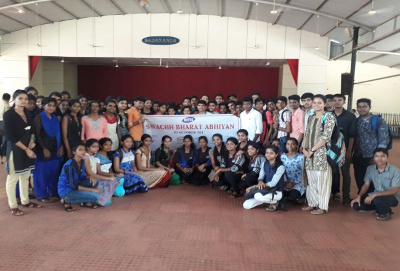 Conducted an essay writing competition, in association with Rural Police station, Karkala, on 7th July 2017 on the topic ‘Raastriya Bhavaikyate mattu Komu Souhardate’. The first place was awarded to Yashwitha P. Shetty, III B.Com (B), second place was bagged by Poojashree, I B.Sc, and third place was secured by Nayana, II B.Sc 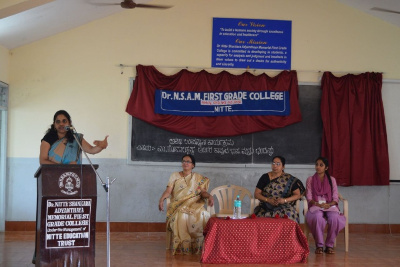 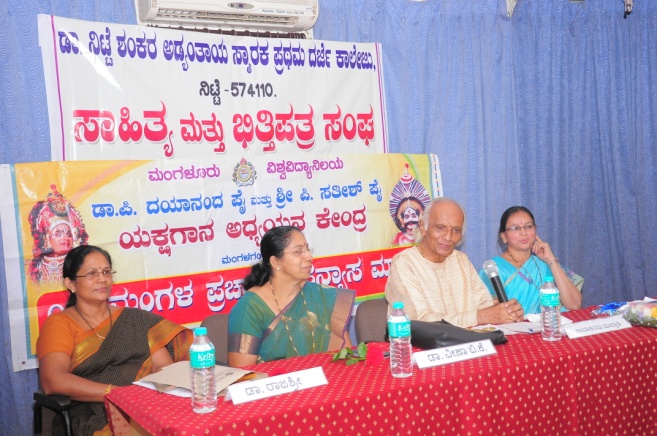 Dr. Dayananda Pai and Sri Satish Pai, Yakshagana Study Center, Mangalore University in collaboration with Literary and Wall Magazine association of the college conducted a guest lecture, as part of ‘Yakshakavi Kavyayana Program, 2017’, on the topic ‘Seetha Nadi Ganapayyaravara Baduku mattu Baraha’, by Shree Ambatanaya Mudradi, writer and Yakshagana Poet and singer on 28th September, 2017. He said, “Seetha Nadi Ganapayya pursued his education while obstacles stood on his way, became famous Yakshgana poet and has written more than eighty ‘Prasangas’. He and his achievements should inspire us and we must imbibe his virtues in us”.

Essay competitions were conducted on the topic, ‘Women’s Cricket Team’, (English) ‘Educational Organizations and Individual Freedom’ (Kannada), ‘Merits and Demerits of Doordarshan’ (Hindi) on 19th July 2017. The first place in English was secured by Stephy Santhamayor, II B.Com(C), first place in Kannada was bagged by Poojashree, I B.Sc, and the first place in Hindi was obtained by Kruthi, III B.Com (B).

On account of Ganesha Chaturti, cultural performances were conducted and performed on 26th August 2017 in college auditorium.

Conducted ‘Memory Test Competition’ on 23rd August 2017. The first place was bagged by Aishwarya Shetty, III B.Com (A), and the second place was secured by Sheeba, I BBA.

Conducted ‘Pick and Speak’ competition on 3rd November 2017. The first place was bagged by Vyshnavi Bhat, II B.Com (C) and the second place was secured by Varshitha Acharya, I B.Com (A) 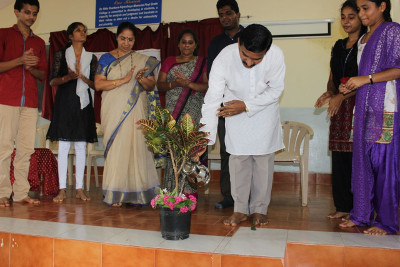 ‘Swach Bharath’ campaign was organised in the Belman premises, in association with Youth Red Cross Society of the college and Rotary Club, Belman on 13th August 2017.

Organised a workshop in association with NMAMIT, Nitte, and Village Panchayat, Nitte, on the topic ‘Solid and Liquid Resource Management’, in the college auditorium on 18th August 2017. The guest speaker was C. Srinivas Vellur, Project Director, Indian Green Service. The importance of the modal developed by him is to convert “Garbage into Gold” by using garbage management program through door- to - door garbage collection. “Garbage will be looked as income generating resource rather than waste”. The SLRM administration had planned to start garbage disposal through sustainable solid and liquid resource management.

An awareness rally was taken out by the NSS volunteers on the theme ‘Solid and Liquid Waste Management’, at Nitte Village on 5th October 2017. 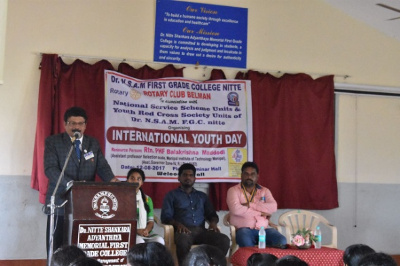 ‘International Youth Day’ was observed in the college, on 12th August 2017, in association with Rotary Club, Belman and NSS units of the college. Resource person Mr. Balakrishna Maddodi, Assistant Professor, MIT, Manipal & Assistant Governor Zone 4 Rotary International district- 3182 enlightened the students about the ‘Role and Importance of Youth’ in the present era.

Essay Competition was organised on the topic ‘Is Patriotism Alive in the Youth?’ on 19th November 2017. The first place was bagged by Stephy Santhamayor, II B.Com (C) and the second place was secured by Vindya, III B.Com (B).

Conducted ‘Business Quiz’ on 30th August 2017, where the first place was bagged by Merwyn Russel Saldanha and Nandashree Shetty, I B.Com (A) and the second place was secured by K. S. Ahnsan Bashir and Mohammed Fahad, III B.Com(A).

‘All India Essay Writing Event- 2017’ was conducted in association with Shri Ramakrishna Mission on the topic “The Greatest Enemy of Knowledge Is Not Ignorance, It Is the Illusion of Knowledge” on 26th August 2017.

Essay writing competition was arranged on the topic ‘Life and Achievement of Late Sri Ullal Srinivas Mallya’, on 17th September 2017, for the Under Graduate students of Udupi and Mangalore District at Shri Bhuvanendra College, Karkala. Students participated in the competition dynamically.

The 53rd A. D. Shroff Memorial Elocution Competition was held on 21st September 2017. The first place was bagged by Stephy Santhamayor, II B.Com (C), second place was secured by Kruthi, III B.Com (B), and the third place was taken by Dheeraj Kini. III B.Com (A). 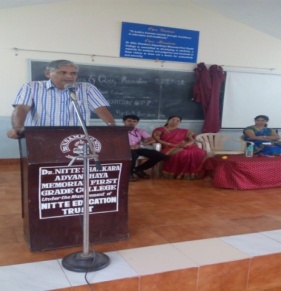 Conducted a guest lecture on the topic ‘Why Generation Gap?’ by Dr. A. Shrinivas Rao, Associate Professor, Dept. of English, MGM College, Udupi, on 26th September 2017. 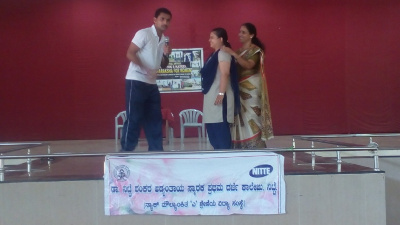 Group Discussion competition was arranged on 24th August 2017, on the topic ‘Woman in Combat Roles’. The first place was bagged by Acharya Trupti Vishwanath, III B.Com (A) and Shetty Ashwitha Ashok, III B.Com (B), second place was secured by Raksha, II B.Com (A).

The Training and Placement cell of the college had arranged Bank Examination coaching (IBPS) for the clerical and probationary officer post for the final year students, by TIME, Udupi, from 29th July.

Organised a two day 'Leadership Training Camp' on 6th and 7th September 2017 for the Students’ Council members and final year students in collaboration with Forum of Free Enterprise, Mumbai. Various topics like Communication skills, Self Esteem, Goal Setting and Time Management were covered in the sessions by the resource persons Mrs. Clarissa Jathana and Mr. Vivek Patki, Trainers, Forum of Free Enterprise, Mumbai.

Conducted an orientation program on the topic 'CAT, MAT and PGCET Exams for MBA on 8th September 2017 for the final year students. Mr. Arun Gundmi, Regional Manager, TIME, Udupi, was the resource person.

Sports and Games Association and its Achievements

The following students bagged prizes in the 8 Km Cross Country: 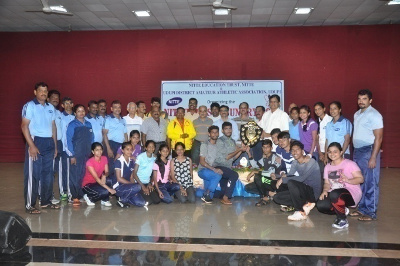 Mrs. Arya J. Namboodiry, Lecturer in English, was the resource person for the talk on ‘Technical Writing’ for the first year B.Tech students of NITK, Surathkal, on 6th October 2017.

Mrs. Arya J. Namboodiry, Lecturer in English, delivered a talk on ‘Creative Writing’ for the first year B. Tech students of NITK, Surathkal on 3rd November 2017.